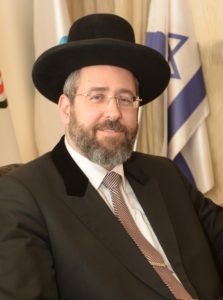 Born in 1966 in Tel Aviv, Rabbi Lau is the son of former Ashkenazi Chief Rabbi of Israel Rabbi Yisrael Meir Lau. He studied at Yeshivat Yishuv HaHadash, and later at Yeshivat Beit Matityahu and Yeshivat Ponevitch.

He was the first rabbi of the town of Shoham. When the city of Modi'in was established, he was chosen as its Ashkenazi Chief Rabbi alongside the Sephardi Chief Rabbi Eliyahu Alharar. Along with Rabbi Alharar, he established an array of Torah classes in the city, including on the subjects of kashrut, eruvim, and Jewish weddings. Rabbi Lau is a reserve major in the Intelligence Corps.